Birmingham-Shuttlesworth International Airport (BHM) celebrated the $201 million renovation of its terminal and concourses in August; but “renovation” doesn’t fully convey the magnitude of its transformation.

During the nearly four-year project, crews stripped BHM’s old 1970s terminal to its skeleton and completely reconstructed the facility – nearly doubling its size from 235,000 square feet to 455,000 square feet. The Alabama airport also gained a new concourse and Federal Inspection Station, consolidated security into a single checkpoint, added a new baggage screening system and much more.

“The old facility was in disrepair,” explains Alfonso Denson, president and chief executive officer of the Birmingham Airport Authority. “The infrastructure was no longer able to accommodate what we needed in order to offer the public and our stakeholders a first-class facility. Our only option was to strip everything down to the steel beams and rebuild. In the process, we were able to expand the footprint and add a lot of other great features to the facility.”

The airport authority’s overarching goal for the new terminal was to minimize operatingcosts and maximize efficiencies in order to extend the useful life of the facility for at least another 20 years and allow for future growth, Denson notes.

Seeds for BHM’s Terminal Modernization Project were planted a decade ago, when the airport authority began strategizing about how to bring the 1970s terminal into the 21st century – and what kind of budget that would require. Discussions with the airlines and customer surveys helped establish strategic goals, and the airport authority began thinking about how the project would be funded.

It contracted KPS Group to design the facility, and later hired a joint venture of BLOC and Brasfield & Gorrie as construction manager at risk to help define costs.

“We wanted to do things right on the front end – define the costs before we started,” Denson recalls.
“We lined up the federal funding with TSA and FAA, got the passenger facility charge application approved. We made sure that the cost to the airlines would not be unreasonable (approximately $50 million of the $201 million total cost).”

Defining the budget clearly, and early in the process, proved strategic. “When we started the project, the challenges were not as great as they would have been if we hadn’t done the front-end work,” he reflects. “I’m proud to say we came in on schedule and budget.”

Gray Plosser, principal and project director for KPS Group, notes that the airport authority wanted to be “very transparent” throughout the capital program. “They wanted the support and agreement of their prime tenants and a project for which they could secure funding and financing,” Plosser explains.

Concourse C and the south half of the terminal were demolished and reconstructed during the 17-month second phase. The new building houses the airport authorities’ administrative offices, two airlines and other tenants. Concourse C was shortened in the process, to avoid conflict with a future taxiway relocation, notes Plosser.

The physically active portion of the project – including preliminary reshuffling, demolition and reconstruction – was completed in 44 months.

The new configuration of the concourses required associated airside changes. Throughout construction, crews repaired and adapted the apron to the new layout, which also prompted extensive storm sewer and utilities work.

The construction manager at risk approach allowed BHM to rely on just one contractor to manage the multiple facets of the project under a single contract, notes Brasfield & Gorrie Project Manager Jeff Hart.

During construction of concourses A and B, walls and fencing were used to separate construction areas from secure operational areas, adds KPS Group Project Manager Gary Kimbrell. “Although all workers had security badges, the construction site was unsecured, which gave contractors free access to the work site,” he explains.

Creating a single, centralized security checkpoint and connecting the three concourses on the airside of the new checkpoint were primary goals of the project.

“The old terminal had two passenger security checkpoints,” Plosser informs. “Consolidating passenger screening at one location was a huge improvement because TSA no longer had two separate locations, which was inefficient in terms of staffing and equipment use.”

A new $15 million inline baggage system, which allows all baggage screening to occur on the lower level instead of the departures level in the old terminal, is another marked improvement.

Changes are proving popular with customers as well. In fact, improvements to passenger and baggage screening are some of the most widely appreciated elements of the entire project, reports Plosser. “It makes travel much more convenient for the public.”

Improved screening systems, however, exemplify the authority’s broader primary objective: creating an environment that would improve passengers’ overall travel experience. As such, designers introduced more daylight throughout the terminal and used a lighter, brighter color palette. The new layout eliminates steps and keeps travelers under cover when entering and exiting the terminal.

Concourses and holdrooms were designed to be much more comfortable, with greater seating capacity and variety. In addition, travelers now have free Wi-Fi access throughout the facility. Wayfinding signs and flight information displays, all of which are backlit with LED lighting, were also dramatically improved, Plosser adds.

In addition, the airport added family restrooms, private nursing rooms and a meditation room. A localchildren’s museum sponsored the installation of a play area in each concourse.

Public restrooms were designed in two symmetrical halves, with porcelain tile walls for improved appearance and cleaning ease. In its old terminal, maintenance staff had to close entire restrooms for cleaning. Now, they can close half of the restroom for cleaning and leave the other half open for public use.

Designers specified terrazzo flooring throughout the terminal and concourses. Replacing the old terminal’s tile flooring significantly improved acoustics, notes KPS Group’s Kimbrell. “With the advent of roller luggage, the ‘click, click, click’ was very noisy. The new terminal is much quieter,” he reports.

As part of BHM’s comprehensive sustainability program, its new facilities include a high-efficiency heating, ventilation and air conditioning system and a sunlight harvesting system designed to reduce the use of artificial light.

High-efficiency elevators, escalators and baggage conveyance are also part of the strategy. Rooftop tanks collect and store rainwater, which is then used to flush toilets.

“The airport actually sits in a flood plain,” Kimbrell explains. “By collecting the rainwater and reusing it, the airport essentially removed approximately five acres from the floodplain by reducing the amount of runoff that ends up in the stream running through the middle of the airport.”

Reducing the terminal’s influx of outside air by 50% to 70% was another one of the project’s environmental victories – but not an easy one.

“Air infiltration in airports is very challenging with all the loading bridges, doorways, people coming in 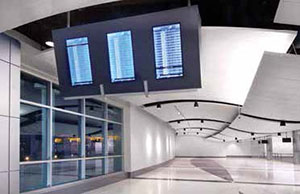 and out,” explains Plosser. “The building envelope (at BHM) is one of the most efficient we have ever done in terms of its average R-value (a measure of thermal resistance/insulation efficiency). The roof is light reflecting, and the glass used throughout the terminal is very efficient thermally. All the glass is shaded with louvers or north facing. Light monitors were installed in the concourses, allowing the airport to operate concourses using virtually no artificial lighting during daytime hours if the sun is out.”

Given the numerous environmental features of its new facilities, the airport plans to apply for silver certification of Leadership in Energy and Environmental Design from the U.S. Green Building Council.

Prepping for the Future

BHM’s new terminal has 19 gates, with room for four more when the need arises. Currently, the airport moves approximately 2.6 million passengers per year through its terminal; but the new facilities can “easily handle double that amount,” says Denson.

With the addition of the new Concourse A, the airport created space to add a Federal Inspection Station. The new Customs and Border Protection facility can process approximately 400 passengers per hour, with space available to expand and accommodate an additional 180 passengers per hour.

“We included the Federal Inspection Station in order to pursue international air traffic in the future,” Denson explains. “It doesn’t guarantee anything; but it gives us the opportunity to begin marketing the airport for international traffic. That’s part of our long-term strategy.” 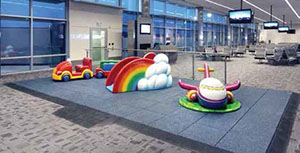 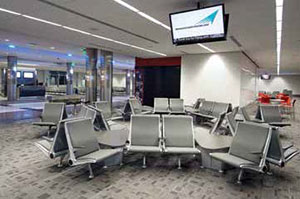 Birmingham-Shuttlesworth International Airport Terminal consists of a single building divided into a couple of floors:

Access to the upper floor by escalators and lifts.

This level hosts the Check-in facilities. Find also a corridor from north to south and from east to west which links all three concourses and boarding gates (A1 to A8, B1 to B5 and C1 to C5) to the main terminal.

Access to the lower floor by escalators and lifts.

Find ATMs throughout the main terminal.

Passengers can access to free Wi-Fi connecting to “BHMFREEWIFI” network.

Find dedicated spaces for all family in the upper floor of the main terminal.

Also called meditation room, it is located on the upper floor. Find a moment for yourself and relax prior boarding your flight.

Throughout both levels of the main terminal there are nursing rooms where you can find everything you need to take care of your baby.

Travelling with animals? In both ground and upper level find the Service Animal Relief Area where your pet will find all the amenities it needs. In the ground level, there is the grass area which will enjoy for sure. Also, find pet waste disposal containers for your convenience.

There is a police station located in the upper level of the main terminal.

The Skycaps service provides you aid and assistance to passengers in BHM Airport. Find Skycaps desks in the upper level and also in the baggage claim area.